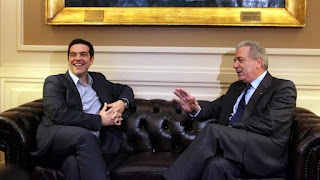 Meeting with commissioner for Migration, Dimitris Avramopoulos…
it has, exceptionally, in a few minutes at the Maximos Mansion, the prime minister Alexis Tsipras. Focus of the meeting of the two men the refugees and the threat of the country leaving the Schengen.
The meeting of prime minister with the Commissioner of Immigration will be at 14:30, as announced a few minutes after 14:00 from the Press office of the prime minister.
The tÃªte-Ã -tÃªte is a Two – Avramopoulos comes the time that the government decided to turn to the help of the army and to use both sides of the border in the Sindo and Far, to accommodate refugees and immigrants. In these camps, with a capacity of 8,000 people, will be accommodated, will be recorded and will be separated refugees and immigrants. The centres will be guarded by the army and the police, and those who are driven there, they will remain for 48 hours before promoted within the country.
With the assistance of the army speed up the work on the hotspots in the island of Samos, Lesvos, Chios, Kos and Leros, for which the deputy Foreign minister, Nikos Xydakis, speaking to the Xenos 90,1 and Nico charlie rose, the view that will be ready by February 18.
Source