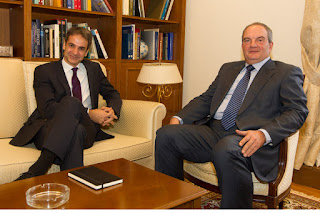 The meeting with the former prime minister is the first to make the…
new president of the New Republic – Will follow the meeting with Antonis Samaras – For the insurance the first meeting for the program of 111 days
With former prime minister Costas Karamanlis meets at this time the new president of New Democracy Kyriakos Mitsotakis opening the circle of contacts with the top executives of the party after the time of his appointment as the new head of the opposition.
The meeting, Mitsotakis-Karamanlis takes place in the office of the former prime minister in the House. There, in the Parliament, Kyriakos Mitsotakis will in a little time meeting with Antonis Samaras.
Prior to the contacts of the mr Mitsotakis with the parliamentary representative of the party John Vroutsi, the coordinator of the COMMITTEE on Social Affairs, member of Kavala, Nico Panagiotopoulos and the chief of the Sector of Labour, Social Security and Welfare, member State, Vassilis Oikonomou, as well as on the cutting edge of the preparation of the new president, is the insurance in view of the crucial vote in the House after the deposit of the relevant bill by the government.
As the new president of the SOUTHWEST leaves no day go to waste, and puts forward the timing of the 111 days for the organisational restructuring of the party with the aim of May 1, the New Republic is completely ready to take any kind of responsibility.
Pending the meeting with his opponent in the second round, former president Vangelis Meimarakis, while, probably, on Thursday will convene the Group. In the meantime we have contacts with parliamentary executives to follow the choices of the officials at parliamentary level (parliamentary representatives, Ï„Î¿Î¼ÎµÎ¬ÏÏ‡ÎµÏ‚, secretary, and bureau K.The.) mr. Mitsotakis wants to give a special role, by establishing, as he had announced, and campaign evaluation procedures.
Source