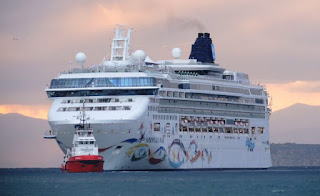 The maiden of the approach to Piraeus held yesterday the Norwegian Star of Norwegian Cruise line…
The boat will come another time this year, in Piraeus, (3.11) ,and by the time we sort out this several times,since it will replace the almost brother of the Norwegian Jade.It has a length of 294 meters and a width of 32,while can accommodate 2350 passengers ÎµÎ¾Ï…Ï€Î·ÏÎµÏ„Î¿Ï…Î½Ï„Î±Î¹ than 100 people crew .It’s made in the Meyer Werft of Papenburg, Germany in 2001.His brother is the Norwegian Dawn.
The difference with the Jade (Jewel Class),although visually look like, is that the series of Jewel Class is a few feet wider and that the gross tonnage of the ships is about 2000 tons more.
The departure of the last evening through the lens of pireaspiraeus.com