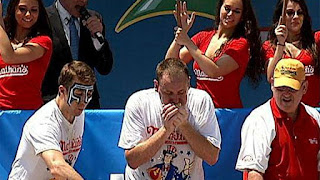 The title of the fastest swallowing a hot dog won once again…
Joey Jaws Chestnut after the break of last year’s defeat in the competition
it happened on Coney Island.
The 32-year-old american took back the title of champion by consuming it in 10 minutes a total of 70 hot dogs down the relevant record.
In the final he defeated the man who last year took the first prize for the 24-year-old Matt “The Megatoad” Stonie . The victory of 32Ï‡ÏÎ¿Î½Î¿Ï… was overwhelming as he left his opponent behind by 17 hot dog, reports the New York Daily News.
The previous record belonged also to the same with 69 hot dogs in 2013.
“Last year was tough. This year is better than any other,” said Chestnut after the victory.