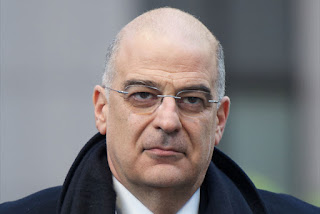 Nikos Dendias on the show. “Now,” the broadcaster Sky
The Parliamentary Spokesman and Mp for Athens B in the New Republic, Nicos Dendias, participated in a debate on the political developments this morning on the show “Now,” presented by the journalist Anna ÎœÏ€Î¿Ï…ÏƒÎ´Î¿ÏÎºÎ¿Ï… to the tv station Sky.
Among other things, mr. Dendias said:
Â· On the previous government we created a modern service, Asylum for refugees, with rates of granting asylum, which went up from 0 to 9%
Â· The refugee is primarily a migrant. We delivered a complete plan that does not apply. As I said in the House if they want they can ask us.
Â· There should be open infrastructure for them eligible for asylum and vulnerable groups and closed to illegal immigrants.
Â· The government abandoned the program returns illegal immigrants, there was, and he did absolutely nothing.
Â· Tries really mr ÎœÎ¿Ï…Î¶Î¬Î»Î±Ï‚ the last three months to clarify the situation. But think about while there was a service for the utilization of eu funds for the migration, the government of SYRIZA-ANEL canceled in practice, and only 7 months later legislated the new managing authority that would absorb money.
Â· The result of non-utilization of funds it was around this time the refugee-migrant to pay for the Greek taxpayer out of pocket.
Â· The government and the predecessor of mr ÎœÎ¿Ï…Î¶Î¬Î»Î± competent minister made criminal mistakes in the migration.
Â· And in the insurance the government pays the big lie and the electoral deceit of the citizens.
Â· We are against the closure of the roads, but those proposed by the government for farmers-professionals it is true that it can be applied.
Â· The government doesn’t know where you’re stepping, and where it is. And the worst part is that they began to reappear in the articles about grexit.