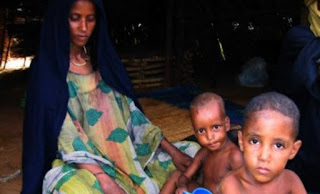 Millions of people will still be confronted with a range of… lack of food and water at the beginning of 2016, as well as drought and floods destroy crops and put it to the test the humanitarian organisations at the international level already warn that they find it difficult to meet existing needs.
The extreme phenomena caused by this meteorological phenomenon El NiÃ±o, which the United Nations describes as the worst of the last two decades, occurred at the time of the armed conflict and persecution forced about 60 million people â€“a number without historical precedentâ€“ to flee their homes.
Relief organizations such as the Perfectly, the World Food Programme (WFP) of the United Nations and Care International pointed out that this double blow, the combination of extreme weather events and wars, increase the needs in terms of humanitarian assistance and the financing and add that it is crucial that the aid can reach vulnerable communities in order for the situation not to get worse.
In Ethiopia, the government estimates that 10.2 million people of the total population of 94 million people, will need humanitarian aid in 2016, because of the drought which is intensified by the El NiÃ±o phenomenon. The government of Papua New Guinea estimates that three to seven citizens to be affected by the drought.
“Millions of people in places like Ethiopia, Haiti and Papua New Guinea are already experiencing the effects of the drought and destruction of crops,” he points out in a communication of the Jane ÎšÏŒÎºÎ¹Î½Î³Îº, director of the british annex of the international organisation of relief Perfectly, and stresses that the organizations have already reached the limits of their possibilities, as they struggle to cope with the crises in Syria, South Sudan and Yemen, and is not in a position to respond to emergencies on a large scale in other regions of the world.
The WFP estimated that in 2015, approximately 795 million people affected by the famine, 98% of whom live in countries with developing economies, reports the Athens news Agency.
The ÎšÏŒÎºÎ¹Î½Î³Îº reported that South Africa has already declared several counties a state of disaster because of drought and Malawi estimates that 2.8 million people will need humanitarian assistance before the March.
The Food and Agriculture Organisation (FAO) of the United Nations had warned in March that the event of the phenomenon El NiÃ±o will be intense and appears to be the most intense of the last 18 years. The peak is expected to be in early 2016, shortly before the harvest time in South Africa. There is a risk of the harvest at the beginning of 2016 to be inadequate.
In Guatemala, Honduras, El Salvador and Nicaragua, approximately 2 million people already need food aid due to droughts and unexpected heavy rainfall, and more floods are expected in January, stressed the ÎšÏŒÎºÎ¹Î½Î³Îº.
The ROP also expresses concern at the situation in Yemen, where families in the war torn city Ties, suffer from hunger for weeks. Throughout the country it is estimated that 7.6 million people of a total population of 24 million people suffer from hunger.