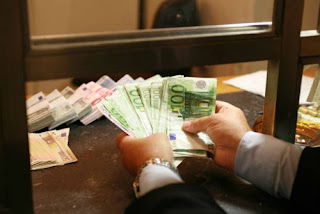 23%… a decrease in deposits of individuals and business in a year. According to the data of the Bank of Greece, the total deposits of the private sector increased to 123,4 billion. euro 120,9 billion. euro, which was at the end of November.
A year ago, however, that in December 2014, deposits amounted to 160.3 billion.euros.
In terms of lending, the 2015 closed with a reduction of 2% with the result that the debt of the private sector banks to limit the 204,340 billion.euros from 212 billion. euro, which was at the end of 2014. The debt of enterprises amounted to 96,3 billion euro of 101,3 billion.euro at the end of 2014, and households to businesses and households in 94,5 from 97,1 billion. euros respectively.
In the meantime, the monthly net flow of financing to businesses in December 2015, was positive during 355 million. euro, against a negative net flow of 176 million. euro in the previous month. Negative by 98 million. euro was the monthly net flow of credit to individuals and private non-profit institutions in December 2015, against a negative net flow 256 million. euro in the previous month.