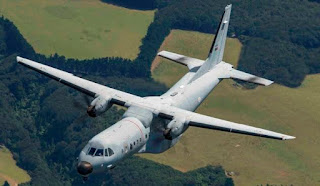 The procurement of two aircraft, one in forming regular transport and a maritime surveillance type …
C-295, construction of the Airbus Defence and Space, announced the government of Equatorial Î“Î¿Ï…ÎÎ½ÎµÎ±Ï‚.
In accordance with the notice of the government of the small african country’s delegation visited the production facilities of Airbus Defence & Space in Seville, Spain for the signing of the contract.
Based on the existing programming of the aircraft with a configuration of tactical transport will be delivered in September 2016, while the aircraft maritime surveillance is foreseen to be delivered in 2017.
The two C-295 will operate the air Force of Equatorial Î“Î¿Ï…ÎÎ½ÎµÎ±Ï‚ that it has in service four fighters Sukhoi Su-25, an aircraft of tactical transport Antonov An-72, two training aircraft Aero Vodochody L-39, seven attack helicopters Mil Mi-35, helicopter, general-purpose Kamov Ka-29 and a heavy transport helicopter Mil Mi-26.
Source