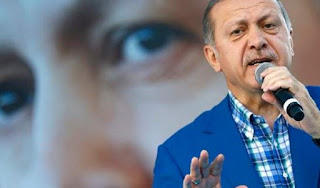 No end to the challenges of the Turkish President Recep Tayyip Erdogan, who…
in a short period of time mentioned, even indirectly, again, the issue of the border.
In one of the three speeches made by mr Erdogan today in Î ÏÎ¿ÏÏƒÏƒÎ±, he said, even with that Turkey respects the borders with a heavy heart while he made indirect reference to Thessaloniki.
After the refusal of the prime minister of Iraq Haider al Ambady in the proposal of Ankara to attend the Turkish forces in the battle for the expulsion of the jihadists of the Islamic State from Mosul (Turkey wanted to participate in the business as it continues to consider that the Mosul, which was once part of the Ottoman Empire, is located within the sphere of influence), the Turkish president said that Turkey respects the territorial boundaries of all countries, even if it “weighs upon the heart” of the Turks.
“Some ignorant people say, what kind of relationship Turkey has with the area from Iraq to Bosnia? This geography is part of our life. We can say that we accepted the present borders, the territorial losses due to the consecutive wars to take a breath…”, he said, according to skai.en,, in a speech of Erdogan and added that the borders of these won’t be accepted lightly.
“We must not forget, that the territories in which they were born and raised leaders, who founded the current state, were left outside the borders of the new state. Do you know where and what I mean,” he added, making direct reference to Kemal and Thessaloniki, without name neither Ataturk nor the city.
However, in an attempt to dispel the impressions, he noted diplomatically: “Even if it falls on our hearts, we respect the geographical borders of all countries”