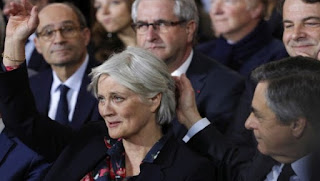 Wife of Francois…
Fillon, the candidate of the Right in the presidential elections of France, Penelope Fillon, which shall be borne by the suspicion that he benefited financially from Î±ÏÎ³Î¿Î¼Î¹ÏƒÎ¸Î¯ÎµÏ‚ as parliamentary assistant, he received in addition to the amount of 45,000 euros in damages for dismissal from the position, which has made the Assembly of the republic, writes the newspaper Le Canard enchaÃ®nÃ© in tomorrow’s leaf.
In accordance with everything that transmits the Athenian Agency, in Fillon paid in 2002 in the amount of eur 16,000 as compensation, i.e. the equivalent of salary wages 5 months ‘ in the context of a work contract with a duration of 5 years with her husband, despite the fact that he was hired again by his successor in the national Assembly, Mark Î–Î¿Ï…Î»ÏŒÎ½Ï„, according to the publication of a weekly newspaper.
“The law does not provide for such a height compensation dismissal for a parliamentary partner” is highlighted.
According to the newspaper, also received, in November 2013, the amount of 29.000 euros as a premium” after working again for her husband, who had re-elected a member, for a period of 1,5 year.
The French justice has launched an investigation to clarify the truth about the work he has done or not done for 15 years, Penelope Fillon, a case that has cost civil to her husband in view of the elections in the Spring.