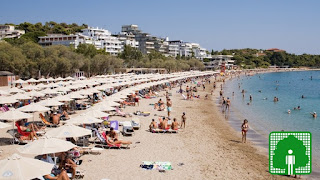 The Panhellenic Center of Ecological Research (PAKOE), continues the great research that it performs this summer in collaboration with the National Technical university of Athens, and concerns the…
quality of bathing waters at popular beaches of Greece and the drinking water from the taps. Today published the results in bathing waters for 15 crowded beaches of Evia and indicative for (4) four samples of drinking water.
The big research concerning the beaches and the water from the taps at the national level, began in June and will be completed in mid-July. PAKOE will gradually released the results from the sampling of bathing waters at the beaches, to enable the citizens to know that they can swim freely without having to put your health and that of their children at risk, while at the same time I can know and for the quality of drinking water.
The sampling of these, made by a scientific group of the PAKOE, ( chemists, biologists etc.)
From each point (beach or faucet), collected water samples. Then these samples are transferred to a refrigerator and with absolute safety in certified laboratories available to the PAKOE and analyses. 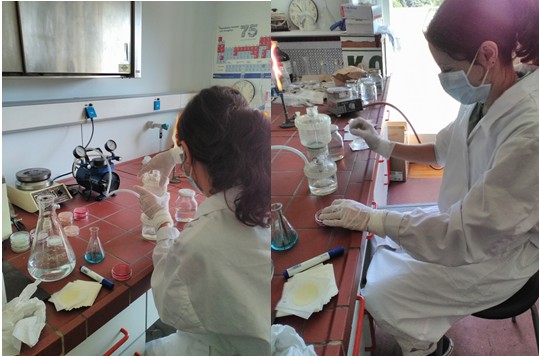 What did the results of the bathing waters at the beaches of Evia
In the broader area of Evia, tested a total of 15 points. From these beaches the 6 were found to be unsuitable for swimming and the 9 appropriate. Also checked 4 points of drinking water of which in two, the water was found unfit for drinking.
What does the scientific team of the PAKOE
Sampled seawater and drinking water on June 20, 2016 in the areas of Evia with the following conditions:
A few samples were made at 5 meters from the sea , while others were made in different places far enough away from the coast.
The method of detection and counting of the microbial load or the live microbial population of bacteria E.coli, of the total ÎºÎ¿Î»Î¿Î²Î±ÎºÏ„Î·ÏÎ¹Î¿ÎµÎ¹Î´ÏŽÎ½ and enterococci, in the original sample was made with the method of Filtration through a membrane pore of 0.45 Î¼m, a specific volume (100 ml of water sample).
The results of the assessment of microbial populations that are presented in the following table are expressed as number of viable units, i.e. Colony Forming Units (CFU) per 100 ml of sample water (cfu /100 ml).
Table of results of detection and enumeration of microbial load of sea and drinking water with the method of filtration membranes (MF), on the island of Evia.
Explanation: K= a suitable beach or water suitable for drinking
A= a bad beach or water unsuitable for human consumption 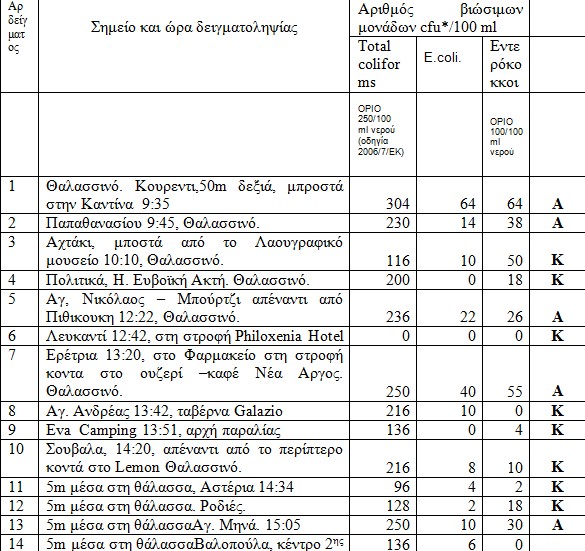 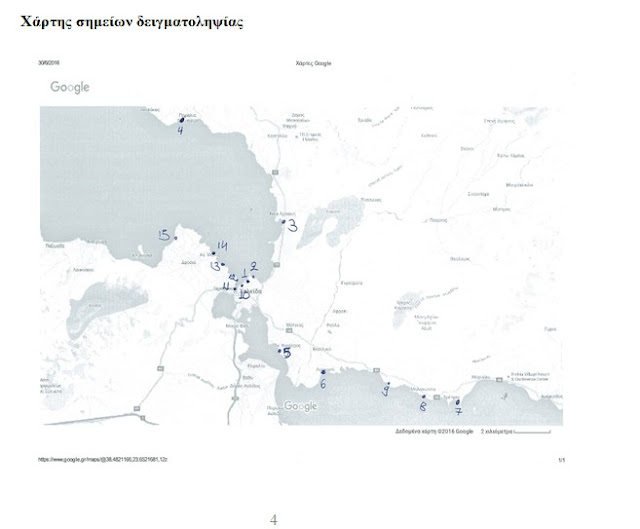 The impact on Public Health from contaminated water
If the water is either drinkable, or that we enjoy doing bathrooms the sea is not free from micro-organisms, then it is possible to be the cause of transport, dispersion and transmission in the population of pathogenic micro-organisms and, therefore, to be consul of extensive epidemics Ï…Î´ÏÎ¹ÎºÎ®Ï‚ origin. It is known that in several cases, it has become transmission of diseases in drinking water. The micro-organisms that are of interest to water quality from the point of view of hygiene, it’s mainly viruses, bacteria, protozoa and ÎµÎ»Î¼Î¯Î½Î¸ÎµÏ‚ (helminthes or parasitic worms. Also some microorganisms are associated with problems of odor and taste in the water and with views of mucilaginous microbial masses in the interior of the pipes of the distribution network (bacteria, algae, fungi).
The European regulation (98/83/CE) sets limits for the minimum values of microbiological parameters in drinking water to be safe and appropriate for humans, i.e.:
â€¢ Absence of Escherichia coli in 100ml of water
â€¢ In the absence of Enterococcus in 100ml water
By the Secretariat of the PAKOE