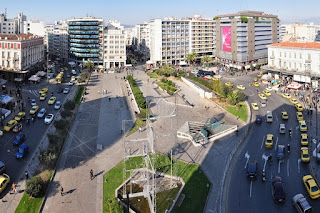 Intense interest of Greek and foreign business groups for new investments in the hotel market of the Greek capital…
Intense remains the interest of Greek and foreign business groups for new investments in the hotel market of Athens, because of the good course that deletes the athenian tourism in the last few years.
According to the Daily, the interest is focused especially in the areas close to Omonia square, with either the reopening of old plants or the retrofitting of existing buildings. In particular, investments are expected to be in five premises which will be used as hotel units. The three buildings that were formerly used as hotels are located on the Omonia square, while the other two belong to an institution, and one in an insurance fund.
At the same time, is proceeding, and the procedures for retrofitting building complex in a hotel, on the road Ag. Constantine, also property insurance fund, while in ongoing discussions for the rental of a hotel unit that is not functioning on the road to Piraeus.
In the meantime, expectations have been developed for the re-operation of the former hotel Hesperia on the road Stage. As stated in the K, the owner of the Single Fund for Independent Workers, has initiated a series of preliminary procedures in order to proceed to declaration tender for long-term rental. The set of tasks and the necessary authorisations will be the responsibility and expense of the lessee.
In Stadiou street, at the height of the square Kolokotroni, it is expected to operate another hotel unit in a building that was sold by the OTE Property. Developments are expected in the coming period and for the launch of operations in order to operate even a hotel in Ermou street.
On the other hand, in a stand waiting are the creditor banks for the sale of the Athens Ledra is located on the road Avenue. It is recalled that the year 2016 was attempted three times for the auction of the unit, but without result investment interest and now are in ongoing discussions for the acquisition of the unit by an asian company.
According to information, in the final stage of the process for the completion of an agreement by the Zeus International, in cooperation with the american chain Wyndham Group Hotel, in order to operate a second hotel in the capital. The Zeus worked last December, the Wyndham Grand Athens in the Karaiskaki square.
Reset the Marriott
The next year is expected and the restoring of the hotel brand Marriott in Athens through an agreement that has been finalized to be placed in the unit of Metropolitan â€“owned by the company’s Hotels Î§Î±Î½Î´ÏÎ® A.E.â€“ after the completion of the renovation. The hotel is located on Syngrou avenue will operate under the name Athens Marriott. Also, the Î¤ÏÎ¹Î¬Î½Ï„ÎµÎ¹Î¿Ï‚ Professional and Industrial School of Patras has been leased to the French company Boisee Finances area on the Patission street, against the Archaeological Museum, where it operated oldest summer theater “Athinaion”. Goal and there is the construction of a hotel.
In addition, the Apollo Investments Î—old Co, new owner of the Astir Palace Vouliagmeni FDI, will implement an investment project for the modernisation and creation of new facilities in the luxury tourist complex of the Star. Within March it is expected that the installation of the ÎµÏÎ³Î¿Î»Î±Î²Î¹ÎºÎ®Ï‚ company. During this period, proceeds the sale of the old equipment. The two hotels of the complex is scheduled to resume operations in the spring. The current season will stay open the facilities of the beach, Astir Beach, the Nobu restaurant, and will be open and the marina.
Finally, the Home Holding Holding A.E., new owner of the Hilton Athens, is in the process of planning for the future implementation of the modernisation of the facilities of the unit. The company, in addition to the hotel operation, programming and sale of luxury residences from the potential of the rooms of the unit.
Source