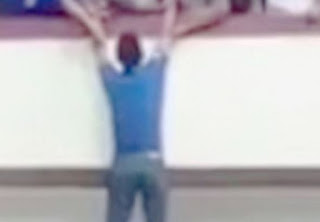 A new “madness” takes up the students all over the world, who now play with their friends “hanging”. However, it is not well-known, traditional game that we know of, but something much more dangerous: Kids are holding the hands of a classmate and the “hang” in the gap!
The student who hover, trying to keep as much as he can to win the informal contest and emerged “champion”. Teachers and parents are alarmed and call for immediate measures to be taken, as they consider that it is just a matter of time” to mourn the victims.
Two children holding the hands of a ÏƒÏ…Î¼Î¼Î±Î¸Î®Ï„ÏÎ¹Î¬Ï‚ them hanging in the void:

The “gallows” started from South America, but as any kind of “fashion” spreads rapidly among children.
See the video circulating on the internet and it’s really scary for any parent: