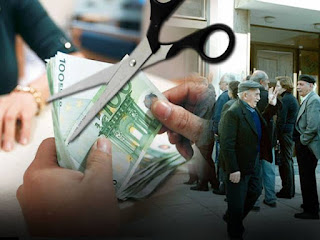 There is no end to the reductions in supplementary pensions, as from 2 August, at least 400,000 new pensioners to see their money to…
dwindle! Waiting for them a “haircut” of up to 40%, mainly for pensions (supplementary and main) in excess of 1.300â‚¬, but there are cases with a smaller sum which will go to the… “cutter”.
The reductions, reports the Free Press, will be made in the amount of the subsidiary the pension if the sum of the together with the main or any other pension they get (old-age, disability, or death) is over 1,300 euro gross. From reductions in ancillary affected almost 400,000 pensioners either with a pair of scissors during a few euros (2-10 euro), or with larger reductions (more than 50 euros per month).
Retirees with principal of eur 1,000 and adjuvant 200 euro (1200 euro) it may seem that there is… except for reductions, but things are not exactly so. As stated in the publication, the sum of which will be taken into account to see the Funds how many exceed 1,300, will not be what they put in their pocket the pensioners, but it will be the gross amount of the sum of main and supplementary.
This amount included the tax, the levy of a disease, and the initial reductions that were imposed in 2010 in the main in excess of 1,400 euros and in 2011 the subsidiary in excess of 300 euro. These reservations were made in the pensions, but the department does not deduct from the amounts taken by retired people, with the aim to rise up artificially the sum of the main and subsidiary over the 1,300 euro, and the “cutter” to catch more. The exact number of retirees affected by the cuts will be greater than 250,000 appreciated in the beginning the ministry of Labour.
Most retirees will see reductions coming from MEDICARE.
The components of the processing that make the Funds, and particularly IDIKA, who shall keep the register of beneficiaries of all the players, for the beneficiaries of basic pension. show that:
– With the main pension (old-age, invalidity, death) as the 1,000 euro is 920.765 beneficiaries.
– With the main pension (old-age, invalidity, death) from 1.000,01 to â‚¬ 1,300 is 98.834 pensioners.
– With the main pension (old-age, invalidity, death) from 1.300,01 â‚¬ and more is 69.897 pensioners.
Total beneficiaries main IKA, without other actors, 1.089.496 pensioners.
Respectively, for the adjuvant have the CAPACITY:
– As 150 euro a supplementary old-age, disability, or death take 278.818 pensioners.
– From 150,01 as 200 euros get 233.362 pensioners.
– From 200,01 â‚¬ and over, they get 206.039 pensioners.
Total beneficiaries of subsidiary only CAPACITY, without other actors, 718.219 pensioners.
The 206.039 beneficiaries of subsidiary CAPACITY who are getting gross amount of 200 euro and above is in the first zone of risk reductions, provided from the basic pension get a gross amount of â‚¬ 1,100 and above.
In the second zone cut are the 233.362 pensioners who are getting gross amount of subsidiary from 150 to 200 euros, if the joint main meeting is from 1.150 euro and above.
In the third zone cut are those who have higher capital (more than 1,250) and a low adjuvant (80, 100, 120 euro).
Of the 470,000 it retired of the Public, supplementary they almost set of policies for pensioners and the retired Police who receive adjuvant from the Î¤Î•Î‘Î Î‘Î£Î‘. It is estimated that the gross sum of main and subsidiary in excess of â‚¬ 1,300 have been over 130,000 pensioners of the Public.
From the Funds of the SOES and banks it is estimated that the “cutter” gets over 80,000 pensioners who are more than the 1,300 mixed of main and subsidiary.
From the NAT-ÎšÎ•Î‘Î retirees with a sum of main and subsidiary exceeding â‚¬ 1,300 exceeding 50,000, to a total of 80,000 pensioners.