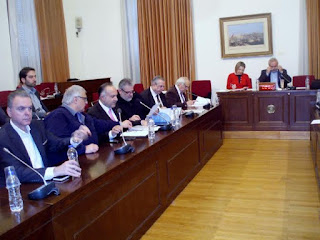 Read the announcement: “The meeting of the Subcommittee on Insular and… Mountainous Areas of the Special Permanent Committee on Regions of the Greek Parliament who was in the Room “President John Nick. Alevras” took place at the Monday (21/01) delegation of Î•ÎŸÎ‘Î•Î headed by the president Î˜ÏÎ±ÏƒÏÎ²Î¿Ï…Î»Î¿ ÎšÎ±Î»Î¿Î³ÏÎ¯Î´Î·.
Subject on the agenda of the meeting was the development potential and prospects of the insular and mountainous regions of the country and members of the Subcommittee was originally called to inform the Deputy Secretary-General of the Ministry of Economy, Development and Tourism, mr Gerasimos Î–Î±Ï‡Î±ÏÎ¬Ï„Î¿Ï‚.
In the introductory speech of the chairman of the committee member of the Dodecanese of the GREEK Dimitrios Gakis, referred to the necessity of strengthening the cooperation society and the central administration, as well as the creation of a Map of Development for the Islands with the aim of both the growth potential of tourism but also of social life more generally.
By the side of mr. Î–Î±Ï‡Î±ÏÎ¬Ï„Î¿Ï‚ reported on the effects of factors such as the seasonality, the tourist crowd, the training of entrepreneurs and workers, the conservation of color on each island, but also the necessity of an integrated maritime national policy with the ultimate goal of a sustainable society in the islands through the activation of both the central authority and of local bodies.
The president of the Î•Ï€Î¹Î¼ÎµÎ»Î·Ï„Î·ÏÎ¹Î±ÎºÎ¿Ï Development Group of Greek Islands mr. Kalogridis, in turn, emphasized to the Subcommittee that the purpose of the Î•ÎŸÎ‘Î•Î since its inception (1994) is the patenting of “insularity” that makes it imperative the design, adoption and implementation of an integrated european and national policy for the island regions. Policy that not simply is absent, but on the contrary, measures have been taken (such as the abolition of the reduced rate of VAT), which severely handicaps any efforts for alternative development opportunities for the achievement of equal conditions of competition and equal participation of the islands in the Greek economy.
Subsequently delivered his opinion Î•ÎŸÎ‘Î•Î on this which include:
(a) a plan of tourism development of each island separately
(b) the institutional participation of the Î•ÎŸÎ‘Î•Î to the ministry of Development & Tourism, and finally
(c) immediate measures for the tourist promotion of the islands affected by the refugee and main the island of Lesvos where the problem has taken on dramatic dimensions.
Then, the president of the Greek Network of Small Islands Lefteris Kechagioglou described and with the hard language of numbers the dramatic depopulation which has been going on for several years in dozens of small islands of our country, particularly after the advent of the “Kallikratis” and stressed the need for the local government to acquire a substantial potential for measures as well as the adoption of the european platform in the southern front.
The european dimension of the issue pointed out from the side of the and the president of the Network of Insular Chambers of the European Union (STORY) George Benetos who stood in both the registered of the European Union’s decision to lift the inequalities to the detriment of the islands of the member states and the results of the study that has been done by Greek and european terms and shows that the abolition of the reduction of VAT on the islands will result in the restriction of public revenue that will result from this.
Mr Benetos, who is also president of the Professional Chamber of Piraeus, has also informed the Subcommittee of the House for, with the institutional role in the STORY, to participate in, at the initiative of Dimitris Avramopoulos ‘ meeting with the theme of the refugee, which will take place on 26 January in Brussels and in which they have been invited by the European Union to inform the chambers of the islands.E.
This was followed by the intervention initially the mayor of Kasos Mary Î¤ÏƒÎ±Î½Î¬ÎºÎ· Î£Î¿ÏÏŽÏ„Î¿Ï…, who stressed that Greece starts from the islands and particularly the remote of the Aegean and mentioned the many problems which beset its own and more serious, and the president of the Chamber of Lefkada and a member of the Î•ÎŸÎ‘Î•Î Sotiris Î£ÎºÎ¹Î±Î´Î±ÏÎ­ÏƒÎ· who stressed the need for cooperation of stakeholders , public and private, to achieve not only the objectives of island businesses and to the financial support of the local communities.
The reason they took the last piece of the sitting members of both the Subcommittee and all parties who originate in island or mountain regions, and gave the “present” in the debate.
The members agreed unanimously on the need for action of the National Council for Island Policy by depositing parallel evidence-based recommendations for the support and defence of insularity in every corner of Greece with axes
(A) a single center island policy
(B) clause insularity
(C) amendment of the regulation of the house in relation to the island life and
(D) cooperation of all political forces and local authorities in the island’s politics.
In parallel also unanimously agreed that the increase in the VAT on the islands is not rewarding and the president, mr Gakis to agree for the deposit of the minutes of the meeting to the president of the Parliament and the further activity of the Subcommittee for this purpose.
For E.The.A.E.N.
The President
Thrasybulus Kalogridis”