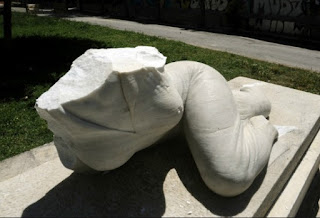 On the occasion of the recent decision of the Athens Municipality to remove and retain temporary works of art that were in…
precarious points in public spaces and suffered damage, or vandalism, we will send you the letter that we gave to the Mayor of Athens Giorgos ÎšÎ±Î¼Î¯Î½Î· on 17 May 2016 on the statue of the Northern Continent on the road Tositsa, next to the University.
ANOIKTH LETTER
NATIONAL ASSOCIATION “NORTHERN CONTLNENT 1914”
To Mayor of Athens, con George ÎšÎ±Î¼Î¯Î½Î·
Today, Tuesday 17 May 2016, we are gathered at the point of where it was located since 1953, the statue of enslaved Northern Epirus, on the Tositsa and 28 October, in order to commemorate the 102nd anniversary of the signing of the Protocol of Corfu (17 May 1914), with which the Great Powers and Albania recognized the Autonomy of the particular country.
We have chosen to celebrate this historic date for the Hellenism of Northern epirus to a token for us point of the capital of the Greek state.
It is with great sadness that we have learned a few weeks ago for vandalism by strangers to the monument which symbolized the enslaved Northern Epirus, an act which we condemn unequivocally after affects blurt out an ill-used section of the Greek Nation.
We welcome your decision to remove the statue in order to correct the major damage suffered.
But at the same time we request you to not to fall of the monument to the victim of negligence and oblivion, with the result that to be forgotten in some warehouse of the Municipality of Athens, but restored soon.
If it is not considered appropriate for the area in which he was for sixty-three years, we believe that there is the possibility to be placed in a central spot of Athens, such as Syntagma square, or wherever it is feasible.
We will monitor the case, with the hope that the next anniversary of the proclamation of the Independence of Northern Epirus (17 February 2017) and on the next anniversary of the signing of the Protocol of Corfu (May 17, 2017), the symbolic monument has been restored and is fitted, and again to some central athenian square in order to remind everyone of the Î±Î»ÏÏ„ÏÏ‰Ï„Î· our Continent.
Besides, the city of Athens must not forget that many of the beauteous and historic mansions that adorn Î±Î½Î·Î³Î­ÏÎ¸Î·ÏƒÎ±Î½ by donations from National Benefactors hailing from the Northern Continent (e.x. Zappeion, arsakeio school, ÎœÏ€Î¬Î³ÎºÎµÎ¹Î¿, Observatory), as well as the northern epirus contributed greatly to the reconstruction of the Greek capital after the second World War.
Let it be the restoration of the statue of enslaved B. Continent an act of gratitude to their memory.