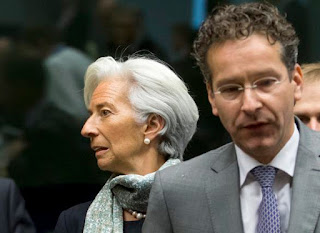 Greece is in a better condition than that estimated by the IMF, stressed the…
president of the Eurogroup, Jeroen Dijsselbloem commenting on the report of the International Monetary Fund.
Mr Dijsselbloem featured outdated the current IMF report, ÏƒÎ·Î¼ÎµÎ¯Ï‰Î½Î¿Î½Ï„Î±Ï‚ that the estimates of the Fund have been overcome due to the development of the Greek economy.
The president of the Eurogroup also expresses amazement that “hardness” -as he said – the comments of the IMF.
He added that although there has been some easing of the Greek debt, needs to be done and other steps. He noted, however, how does not see possibility of a debt haircut, but only the possibility of easing the terms of repayment.