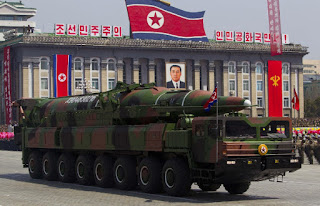 Writes Constantine Pantelis
South Korea urged China to use its influence to rein in North Korea, warning them, at the same time, further challenges from the neighbour after the last nuclear test.
The nuclear test of last week was the fourth of North Korea, although the United States and many experts doubt the claims of North Korea, on a more powerful hydrogen bomb, as the explosion was about the same size as that of the atomic bomb, during the relevant test 2013.
Seoul warned Pyongyang that it is cooperating with the US and other allies for tougher sanctions on the north.
The u.s. House of Representatives for its part, voted almost unanimously to the enlargement of the measures-sanctions targeting the nuclear programme of North Korea.
With regard to Beijing, the South Korean President, Park geun-hye, stressed the condemnation of China against the motion of North Korea.
“I’m sure that China knows very well that if such a strong will is not followed by the necessary measures, we will not be able to stop a fifth and sixth nuclear test of North Korea, nor to guarantee peace and stability on the Korean peninsula. I believe that the chinese government will not allow the situation to deteriorate further, ” said the south Korean President.
According to the state media of North Korea, the leader Kim Jong-un requested to upgrade and expand the nuclear arsenal of the country.
However, as mentioned above, many experts have questioned the claims of Pyongyang on the test last week was going for a more powerful hydrogen bomb.
Some have also reported that older audiovisual material that shows the alleged detonation of a ballistic missile by a submarine, was a fake.
Source