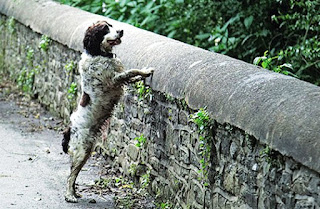 Mystery covers the dive of death that make dogs from a bridge in Scotland, for no apparent reason…
So far, estimates indicate that at least 60 dogs have been killed by jumping suddenly from the bridge that is located near the gothic castle, Overtoun House.
In the absence of reasonable explanation, have not been slow to circulate the most absurd speculation, which converge to the view that it’s all because of the ghosts in the area.
Some of the locals from the West ÎÏ„Î¬Î½Î¼Ï€Î±ÏÏ„Î¿Î½ÏƒÎ±ÏŠÏ claim that at least 60 dogs were driven to suicide by the spirit of the “white lady” of the castle, haunts the building for over a century.
Do not explain, however, how saved about 500 more that they bound.
One of these supports that almost to fall he’s a victim of the ghost, two years ago, when while he was standing near the bridge he felt a nudge, like push, which was intended to throw him down.
At the same point they have been noted and human suicides. In 1994, Kevin Moy threw his three-year-old child, and then he jumped, and he from the bridge, from the same point where they jump and the unfortunate quadrupeds, which the majority of them belong to breeds of hounds.
The point has been placed now a sign warns owners about the risk of the bridge, urging them to have them tied.
Another, more scientific explanation, says that the dogs smell mink living in the area and are attracted to their scent.
David Sands, who specializes in animal behavior, believes that curiosity not only kills cats, but also dogs, stressing that the animals are approaching to see what’s underneath.