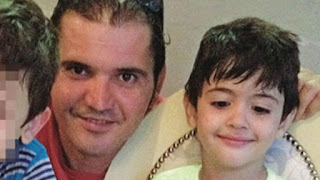 Eighteen days of agony which passed agonizingly slowly for the relatives of Phoebus, that he wished to be found….
safe and sound. Eighteen days after the murder of his mother 4Ï‡ÏÎ¿Î½Î¿Ï… child from the estranged husband, who then disappeared grabbing an innocent child. The mourning for the death of a woman was combined with the thriller of the disappearance of the Phoebus, in a case that shocked the whole country, but fortunately had a happy ending.
Claude Leslie has been detained and is being questioned in the Security Polygyros, after the arrest, which happened in a warehouse a few miles away from the spot of the murder of the estranged wife. As it became known, is expected later to be transferred to the public Prosecutor’s office Polygyros.
How did they get on the trail of a wife-killer by the authorities
The 32-year-old father Phoebus, he murdered his estranged wife and then disappeared, by this terrible ordeal of 4-year-old son.
After 18 days, the police authorities managed to get to his capture, however, how they got on the trail of great interest.
Initially you will have to mention that the 32-year-old wife killer was hiding a stone’s throw from the site of the heinous crime, i.e. close to the ÎŸÏÎ¼Ï…Î»Î¯Î± of Halkidiki.
According to the information of newsit.gr, the arrest happened in a rural area, and specifically near a warehouse. All these days the cops were looking for him there, and believed that it had not been removed from the site, despite the information they wanted, the wife-killer and the little Phoebus to have travelled to several parts of the country.
The cell phone signal and the police checkpoints
A very big role in identifying the wife-killer played and the name of the mobile phone, which the officers took useful conclusions about the location of the 32Ï‡ÏÎ¿Î½Î¿Ï…. Here we have to mention that the man had closed the particular cell phone in the last few days, which made it even more difficult the task of the authorities. However, they managed to bring on his trail.
As was broadcast by mega, the 32-year-old was trying every day to leave the spot where he was hiding, however, the roadblocks of the police has always been the obstacle to escape, after the investigations were daily and intensive in the area from 6 January and so began the thriller.
The testimony of the “key” of a resident of the area
Another catalytic parameter to reach the police in the arrest, was the testimony of a 75Ï‡ÏÎ¿Î½Î¿Ï… a resident of the area. This resident reported to authorities that she saw the wife-killer to roam in fields in the area.
Yes, the reports are that the 32-year-old wanted the realised and rushed to hide among the bushes. This information was destined to be of vast importance to the police authorities.
In the last few hours the entire area was blocked and the investigations involved and the residents of the area, who appeared no longer convinced that the wider area was in the 32-year-old together with the four-year-old child. In fact, the information reported that citizens were those who overpowered!
Well on the health of the Phoebus
The four-year-old boy appears to be in good health, however, as is logical, it is very scared. Originally moved to the home of his grandparents, and then will be transferred to a hospital, in order to examine thoroughly the state of health.
Relieved relatives of four-year-old boy
Scared and frazzled but in good health, the young Phoebus is back in the arms of his grandparents. The first thing that the 4Ï‡ÏÎ¿Î½Î¿Ï‚ just got back to the house he was looking for his mama, as he describes Peter Mavromatis, the uncle of the little child and brother of the victim of the murder that shocked everyone.
They took him home to see his brother, Jason, the kid in front of his eyes he saw his father murdering his mother and then the Smile of the Child will take Phoebus to transfer him to a hospital in Thessaloniki, where it will be examined by doctors and specialists, psychologists.
“It’s weathered, Î±Î´Ï…Î½Î±Ï„Î¹ÏƒÎ¼Î­Î½Î¿, shocked,” he said in turn, the grandfather of Phoebus, who was in front of the arrest of the man who killed his daughter. “I took him in my arms, I was in front of arrest,” he told us.
Source