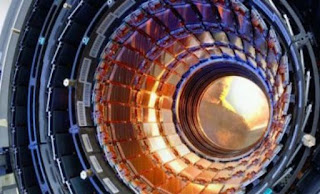 The two independent scientific groups, CMS and ATLAS, that… make experiments with the large hadron collider (LHC) of the European Organization for Nuclear Research (CERN), have concurrent indications that you probably have discovered a new fundamental particle, a higgs boson is much heavier than that of the Higgs.
Although it is premature to talk about a discovery, the data have captured the interest of scientists.
The two research consortia -among whom are to be Greek and natural – made parallel announcements on the issue in the auditorium of CERN outside Geneva (several were sitting on the floor!), which came to confirm the rumors that were circulating the Ï„ÎµÎ»ÎµÏ…Î±Î¯ÎµÏ‚ days, according to the “New York Times” and “Nature”.
The scientists, analyzing the up to now data from the proton collisions in the large hadron collider have detected supernumerary -in relation to the expected – pairs of photon with energy of about 750 GeV (Î³Î¹Î³Î±Î·Î»ÎµÎºÏ„ÏÎ¿Î½Î¹Î¿Î²ÏŒÎ»Ï„ or billion electron volts) each.
This is likely to be the “signature” of a mysterious unknown until today particle, which may belong in the category of boson, but not necessarily similar to the particle (higgs) Boson.
Maybe, but it is just a heavier version of the Higgs, the particle that explains why other particles have mass.
The likely particle can have a mass of about 1,500 GeV and decays into two photons with a mass of 750 GeV each.
If this is indeed the case, then it will be much heavier than the Higgs boson (around 125 GeV) and of every other particle that has been discovered until today.
The representatives of the experiments CMS and ATLAS announced that, for the present, on the basis of the up to now statistical analyses, the certainty of a new discovery is small.
The detector ATLAS has identified about 40 pairs of photon more than those in the standard Model of particle physics, while the detector CMS observed only ten additional pairs of photons.
As physicists, in this early phase, neither of the two research groups would not have mentioned the issue in public, and if the other team hadn’t happened to make an almost similar discovery. Not ruled out, however, this is a coincidence.
In particle physics, scientists have to be careful, because statistics are “blunders” happen all the time, which always comes out eventually, when more data are analyzed.
At this time, the probability of error is estimated to be one in 100 but should be reduced to one in 3.5 million.
If, indeed, discovered a new heavy particle, then this was an important achievement, which would open the door to a new physics, beyond the already known.
The Higgs particle will Ï‰Ï‡ÏÎ¹Î¿ÏÏƒÎµ in front of such a discovery, according to the Athenian Agency.
The representative of the CMS Italian physicist Î¤Î¹Î¶Î¹Î¬Î½Î¿ ÎšÎ±Î¼Ï€Î¿ÏÎ­Î¶Î¹ said that the unexpected signs have emerged, as the team was looking for a possible particle of gravity, the graviton (or Î³ÎºÏÎ±Î²Î¹Ï„ÏŒÎ½Î¹Î¿).
As he said, in 2016, after new research will clarify the picture, whether indeed he has found a new particle, the question would be Ï€ÏÎ¿Ï„ÎµÏ„Î±Î¹ÏŒÏ„Î·Ï„Î±. Until then, one cannot exclude the possibility that the new particle has to do with gravity.
The Greek origin experimental physicist Maria Spiropulu, professor of the California Institute of Technology (Calttech) and a member of one of the two research groups of the CERN, stated that, after the observations of experimental physics, is no longer a work of theoretical physicists to explain what may have been discovered.
At the moment the readings are based on the analysis approximately 400 trillion collisions between protons.
Until the summer of 2016 will be at least ten times volume of particulate collisions, so the “verdict” will be safer.
In any case, as said, Spiropoulou, after the upgrade of CERN, which allows for particle collisions with an energy of 13 TeV (Ï„ÎµÏÎ±Î·Î»ÎµÎºÏ„ÏÎ¿Î½Î¹Î¿Î²ÏŒÎ»Ï„ or trillion electron volts), “we are now entering into an unknown area!”.