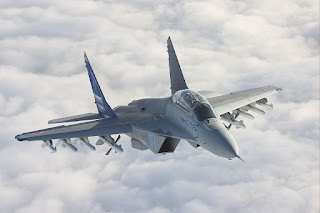 The last “touches” they put the engineers on the new fighter aircraft multi-role type MiG-35 of Russian aerospace forces, according to…
reportage is home to the “Sputnik”, attempting with success to bring forth another ambitious project of the Russian aviation industry…
Even more so when the new fighter Î±ÎµÏÏƒÎ¿ÎºÎ¬Ï†Î¿Ï‚ comes from the history of design office “ÎœÎ¹ÎºÎ¿Î³Î¹Î¬Î½-Î“ÎºÎ¿ÏÏÎµÎ²Î¹Ï„Ï‚” (MiG), which in the last few years has lost the internal “war” against the rival, the office of Sukhoi and attempts to recover the lost ground.
The report stated that the aircraft will be characterized as a… fourth-and put generation! A step from fifth generation fighter aircraft, although keep evidence of this such as the characteristics of reduced Ï€Î±ÏÎ±Ï„Î·ÏÎ·ÏƒÎ¹Î¼ÏŒÏ„Î·Ï„Î±Ï‚ (stealth)!
How is it to be characterized that way, but when the weapons will be externally posted, so you will automatically become sources of emission signal on the radar, so to put it simply, the stealth goes out the window”, only the Russians can explain it. The fighter will be able to “lock” ten targets and engage up to six of them. It belongs to the “family” of MiG-29, but he has done a lot of progress.
Carry a bigger weapons load, the cost of the flight is in two and a half times reduced, pilots will have at their disposal a headset that will there has all the illustrations, has a greater flight autonomy, it can replenish the air and refueled.
Finally, it has advanced system of self-protection and electronic warfare. The manufacturers expect the signing of the contract in 2016 for the fighters, with the aim of full integration in the Russian arsenal in the period 2018-2020.
Source