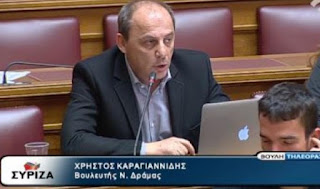 Vociferous in the High Confederation of Multi-child parents of Greece appeared the mp of SYRIZA…
Christos Karagiannidis, on the occasion of a letter of Î£Ï…Ï‚Î½Î¿Î¼Î¿ÏƒÏ€Î¿Î½Î´Î¯Î±Ï‚, in which is declared the opposition of the extension of the pact of cohabitation to same-sex couples. “I have written to my old shoes,” she said at the meeting of the standing committee on Public Administration, Public Order and Justice.
I will refer to a service that did not come to attend the consultation, reported and read a letter of ASPE: “With the passage of a bill changing the Ï„Î¹Î¼Î¹ÏŒÏ„Î±Ï„Î¿ human person to a utilitarian object, and it becomes evident that the attempt to replace the sacred institution of marriage with legal provisions that try to tackle the malaise of the current legal framework. The ASPE does not reject by the society to those persons who are non-smooth physiology of their body and possibly various social conditions, have led to a life path different from that of normal people because of sexual perversion.”
Particularly upset by the posts of Confederation, mr ÎšÎ±ÏÎ±Î³Î³Î¹Î±Î½Î¯Î´Î·Ï‚, pointed out: “these gentlemen after a week they invite us to do the ÏÎ¿Ï…ÏƒÏ†ÎµÏ„Î¬ÎºÎ¹ for the marriage allowance. These gentlemen is a carrier with whom we will converse. Personally I declare that I hate them… I have Them written in my old shoes”.