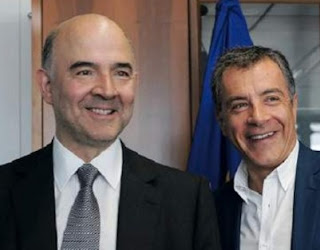 Dramatic message sends Pierre Moscovici by Stavros Theodorakis, with whom he met on Tuesday in Strasbourg…
“It is imperative to close the assessment immediately, and not to lose the February, there is no room for March or April,” stated, in accordance with information, the French Commissioner who will visit on Wednesday, the Athens and you will meet with Alexis Tsipras and Euclid Thanksgiving, in a last-ditch attempt to close the fronts of the evaluation.
Mr Moscovici seems to considers that the evaluation can be closed in a timely manner if the IMF ceases to have unreasonable demands and be based on wrong calculations. The Commission seems to have take on a role of “bridge builder”, but it remains faithful to the line of that “without IMF there is no program”, while trying to persuade the Greek government not to show intolerance, or to Ï„ÏÎµÎ½Î¬ÏÎµÎ¹ the negotiation.
Mr. Theodorakis was interested to know if it has flared up again in the scenario of Grexit pointing out that there are Greek members who speak for a return to the drachma. “These are funny things,” reportedly replied mr. Moscovici.
The head of the River met Monday night and with the Greek Commissioner, Dimitris Avramopoulos, who also seemed anxious for the extension of the negotiation. “The government must understand that he will have a lot of opportunities,” said the interlocutor.
After the meeting with mr Moscovici Stavros Theodorakis made the following statement?
“The assessment must be closed and must be closed now February. The IMF does not require unreasonable measures and to harmonise with the european institutions. This we have discussed with mr Moscovici who plays these critical moments an important role.
And the own point of view, without of course to be able to speak on his behalf, is that the IMF should accept the estimates of the Commission for the Greek development and not stick to numbers and forecasts and in the past have been proven wrong.
Unfortunately the government squandered for another time precious time and right now the country is again with his back against the wall. However, it is not time for opposition crowns, this is not the time to be assigned responsibility.
We call on the government not to lose in February, not to lose the quantitative easing of March, not to get into Greece in the throes of elections, Holland, France, Germany. Only a couple of days and once again the River shall inform the Greek people about the criticality of moments.
The speculative scenario of the delay that discuss some people in the government must be abandoned. No more rolls of the dice with the lives of the Greeks.”
Source