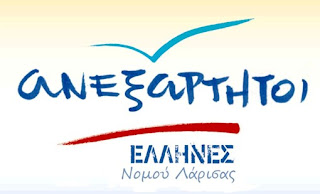 Members of the OBS LIFT-LARISSA held a ceremonial visit to the Governor of the General Hospital of Larissa (Î“ÎÎ›) – University General Hospital of Larissa (Î Î“ÎÎ›) MR. Panagiotis Dwarf, so …
be informed close to the situation.
The Commander, mr. Panagiotis Dwarf after describing the general situation in the hospitals of County, mentioned a few activities and key decisions that have been implemented and others that will be implemented in the forthcoming period, such as : The operation of the mri in Î“ÎÎ› that has already been put into operation, a series of medical equipment through the Public investment Program until March 2017, and the increase of surgical tables and for the 2 hospitals. Highlighted the work done on them, stressed the need to provide high level health services to their patients and the general public and expressed his interest in meaningful solutions to the problems.
Then the OBS LIFT-LARISSA held a meeting with the Commander of the 5th OVER-charging mr. Nestor Anthony. The meeting turned out to be the substantial work that has been done for primary health care, with the processing and settlement problems, such as the placements of personnel and the operation of regional clinics .
Also the OBS LARISSA was for the create – operation and organisation of the central warehouse , the efficient management of material and service their needs in the structures of primary health care.
The issues discussed were the coverage of needs of remote – hard to reach areas of the district, the cooperation of 5 OFFICERS and AMBULANCE services , as well as the support of health centers urban type with corresponding staff .
The Administration of the 5 OFFICERS and the Independent Greeks of Larissa together Î´ÎµÏƒÎ¼ÎµÏ…Ï„Î®ÎºÎ±Î½ for the smooth and effective application and implementation of the action for the primary care health Clinics in the Neighborhood , if staffed with the relevant staff, as well as for the cooperation with the Administrations of the hospital for the continuous improvement of the everyday life of the citizen with the purpose of providing high quality health care services .
The meeting was attended by the members of the OBS LARISSA Dionysis ÎœÏ€Î±Î»Î±Î¼Ï€Î¬Î½Î·Ï‚, Dimitrios ÎœÏ€Î¿Ï…ÏÎ½Ï„Î­Î½Î±Ï‚, Panagiotis ÎÏ„Î¿Ï…ÏÎ¿Ï…Î½Ï„Î¬ÎºÎ·Ï‚ and Christos Vassiliadis.