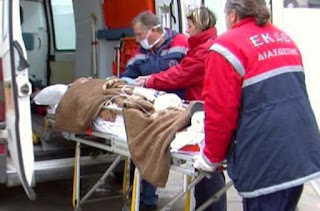 In routes “thriller” are becoming daily occurrences which interfere with the paramedics in Chania because of the obsolete fleet of ambulance or EMS…
As mentioned by the President of the union of employees AMBULANCE Chania mr. ÎšÎ¹Î¿Ï€Î­Ï‚, the three ambulances that are left do not have mechanical support, while those who are in a garage with unknown when it will be repaired in the absence of appropriations.
At noon arrived at the airport of Chania is a heavy incident of influenza from Ikaria, which was forced to transferred to the intensive care unit of the hospital of Rethymno.
And while the elderly patient -who probably has been infected by the H1N1 virus – fighting for his life, his own battle for the safety of the patient given throughout the duration of the journey and the doctor of the AMBULANCE that was escorting him. The ambulance is one of three packages available to the prefecture of Chania, which is anything but properly equipped it is.
The journey from the hospital of Chania in the hospital of Rethymno was the right thing to torture for the doctor, which in the absence of modern equipment took to do it manually artificial respiration to the patient.
The situation in the field of EMS Chania is tragic, as it denounces the president of the union of employees, Anthony ÎšÎ¹Î¿Ï€Î­Ï‚, who asks the cretans ministers of health to find resources to bring back into circulation the two mobile units of EMTS Chania.
Today’s incident from Ikaria where he is being treated already fuii of tubes in the intensive care unit of the hospital of Rethymno, presents all the symptoms of the flu in the heavy form, however, has not yet been confirmed if this is a new case of the virus H1N1.