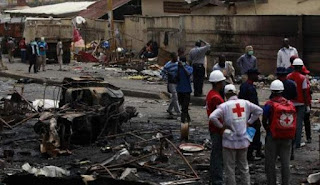 Over 10 people were killed Friday in an attack of a young suicide bomber.
-a kamikaze in a market full of people in the town of Gobi, in the state Î‘Î½Ï„Î±Î¼Î¬Î¿Ï…Î± of north-east Nigeria, according to eyewitnesses.
“There was an attack bomber-a suicide bomber in the stalls with the cereals on the market around noon,” he told afp the Î‘Î½Ï„Î¬Î¼Î¿Ï… Ahmad, responsible for the security of the market.
“I was at the market when I heard a huge explosion,” recounted Mustafa Jalo, a trader. “A lot of we rushed there, where we discovered a massacre,” he continued, making the word for dead and wounded scattered everywhere”.
The attack “I believe that it was committed by a young boy, about 12 years old, ( … ), claimed the lives of at least 11 people and injured many more,” said Ahmad. The Jalo, confirmed that he counted “over 10 dead people” and “many” wounded.
“The market is closed, the traders went to their homes” after the gory attack, added Ahmad.
The Î‘Î½Ï„Î±Î¼Î¬Î¿Ï…Î± is one of the three states that have been hit most hard by the uprising of the islamist organization Boko Haram. The rebellion and the operations for the suppression of have claimed the lives of 17,000 people and has displaced over 2.6 million people in Nigeria since 2009.
The city Gobi desert, about 120 km. north of Yola, the capital of the state, has already suffered many attacks of the islamists, while he had fallen repeatedly at the hands of Boko Haram in November 2014.
Today, day that works this market, “thousands of people from all over the region,” had gone to the Gobi desert to make their purchases, said Ahmad.
In accordance with a count of the French Agency more than 1,650 people have lost their lives in actions of Boko Haram since he took over the duties of the president ÎœÎ¿Ï…Ï‡Î±Î¼Î±Î½Ï„Î¿Ï Bukhari in May 2015.
The new year’s message of the Muslim he had congratulated the army because “have contained substantially the rebellion” of the islamists, adding, however, that “remains to be done a lot of work in the field of security” in Nigeria.
The Boko Haram, in addition to the many attacks it has unleashed on the Nigerian soil since the beginning of the year, commits also terrorist operations in Cameroon and Chad, two neighbouring countries.
At least 32 people were killed Monday in a three-pronged attack bombers-kamikaze in a village of the province of the Extreme North of Cameroon, the third in a series, which the authorities attributed to Boko Haram in January.
On Wednesday, the city Î¤ÏƒÎ¹Î¼Ï€ÏŒÎº of Nigeria has been hit by a triple attack, bombers-a suicide bomber which claimed the lives of at least 13 people.
The Î¤ÏƒÎ¹Î¼Ï€ÏŒÎº, in the state ÎœÏ€ÏŒÏÎ½Î¿, has repeatedly been a target of Ï„Î¶Î¹Ï‡Î±Î½Ï„Î¹ÏƒÏ„Î¹ÎºÎ®Ï‚ organisation, which had launched a raid at a girls ‘ school and was kidnapped by this 276 schoolgirls in April 2014. It is estimated that the 219 remain in the hands of the islamists and appeared most recently in a video distributed by the Boko Haram insurgents in May. The mass kidnapping of the girls had caused a wave of indignation in the international level.