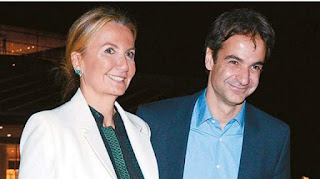 In one of the rare appearances of the Mareva Mitsotakis spoke publicly about her husband’s line of business in view of the elections of Sunday in the New Republic…
The Î•Î»Î»Î·Î½Î¿Ï€Î¿Î»Ï‰Î½Î® businessman Mareva Î“ÎºÏÎ±Î¼Ï€ÏŒÏ†ÏƒÎºÎ¹ found in Kastoria and from the town Hall he spoke of the effort of advertising internationally of the fur, and inevitably he was asked about the elections and the attempt of her husband to become a leader in the SOUTHWEST.
“He had very good results Kyriakos in Kastoria. He has a lot of fans here. I think Kyriakos will win. I believe that it is the only one who has the ability to manage in a very difficult moment for Greece. He’s got the knowledge, especially in the economy, the face of Europe and the international market, the ethos, and I think that is the most suitable.
See the statements of the local channel of Kastoria: