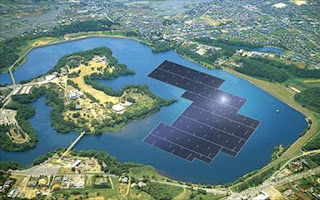 The Japanese multinational manufacturing company Kyocera announced that it started construction of the largest floating production unit of solar energy in the world.
The work of a 13.7 megawatt will be constructed in the reservoir of the dam Î“Î¹Î±Î¼Î±ÎºÎ¿ÏÏÎ± in the region of Chiba Japan, and is expected to be ready during the tax year ending on 31 March 2018.
The integrated project will consists of 50.904 solar panels of 270 watt, installed over the surface freshwater of the dam, and covering an area of about 180.000 square meters. It is estimated that it will produce about 16.170 megawatt hours of electricity annually, which is enough to feed at least 4.970 typical households in the region, and to ensure the avoidance of release into the atmosphere 8.170 tons of carbon dioxide emissions annually.
The solar panels, with an estimated life time of 30 years, you will have the ability to withstand winds up to 190 kilometres per hour and to changes in the level of the water level by up to six metres, while they are also more resistant to corrosion than conventional solar panels.
The floating stations production of solar energy is particularly important in Japan, as well as the possibility of their installation on the abundant resources of fresh water in the country overcomes the problem of a growing shortage of available land required for the appropriate development of conventional terrestrial photovoltaic installations.
The project will be managed by the public enterprise of industrial water services in the region of Chiba, which extends to the east of Tokyo.