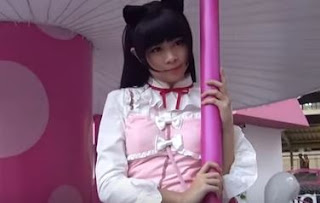 Lolita look! The most well known styles of dress in Japan that makes a splash in the young ages… The Mykonos Live Tv is a pioneer, on the occasion of a photo shoot that took place in the shopping center Central World in Bangkok, Thailand, where was present the camera of the channel, it gives you a taste of the most prevalent fashion for girls in the Country of the Rising Sun. While in western culture the term “lolita” based on the famous homonymous novel of the writer Vladimir Nabokov suggests the sexual well-developed young girl, the japanese lolita fashion tends towards the opposite. This is a modest, romantic and cute outfit with dresses, frills and bows. The central idea behind the new fashion that has captured the young Japanese women is that a woman doesn’t need to wear sexy clothes to be liked! However, this is only a point of view, because most of the girls follow her because they like aesthetically!