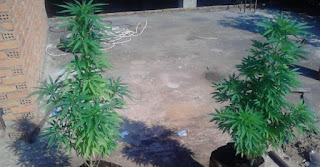 Arrested five persons.
Five persons were arrested the other day… in the afternoon by members of the Î¥ÎšÎ‘Î after investigation that happened at a residence in the province of Limassol.
In particular, during the entrance of the police in the yard of the house, they spotted two persons aged 29 and 26 years who were in possession of a quantity of dry plant matter in cannabis weight of a kilo, about which separate in smaller amounts by placing it in small nylon packs.
Within the house were the three occupants aged 53, 49 and 29 years old. Conducted research within the home where they found 30 grams of cannabis and a metal crusher. In the back part of the yard identified 25 under cultivation of cannabis plants in height from 10 to 60 cm.
During the course of the investigation were also found for other 30 grams of dry plant matter in cannabis, while in a storage space within the court identified seven nylon packs which contained a kilo of dry plant material of cannabis each. All the above persons were arrested on the basis of judicial warrants and detained while the Î±Î½ÎµÏ…ÏÎµÎ¸Î­Î½Ï„Î± received and held as evidence.
Source