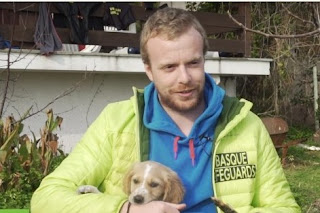 The news agency RUPTLY brings into the limelight the story of Axier of the Basque professional lifeguard…
is located in Lesvos, together with his colleagues for the rescue of refugees who adopted a puppy that was found unaccompanied in a refugee boat.The Axier a few days ago spotted a small dog in one of the boats of Syrian refugees who arrived on the island. The animal didn’t came with no one, no-one sought and the lifeguard decided to adopt it. He and his colleagues named it ÎÏ„Î¯Î½Î³ÎºÎ¹ (Dingui) which is Spanish for boat.
The video that caught the Ruptly TV last Sunday in Lesvos shows the two Ï„Î¿Ï…W to play. The four-legged son of refugees who managed to survive the war and arrived harmless in our country, found his man and is now the mascot of the group “BASQUE LIFEGUARDS”.