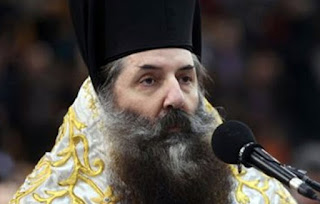 A lawsuit against…
the Metropolitan of Piraeus Seraphim for what she said Friday on her show ” a New on-homosexuality bill, tabled by the Greek Observatory of the Helsinki and the Athens Pride.
The Metropolitan sought from the Safety, in order to be captured in the context of the act, as conveyed by the show “Telltale”.
In accordance with the main C. ÎšÎ¿Ï…Î½Î¬Î»Î·, strain of GHM, the lawsuit was filed because the so-called and the views of the lord Seraphim, breed hatred and racial discrimination.
“Homosexuality is a tragedy! A sexual tragedy. Is mental diversion,” he commented, inter alia, the Seraphim on Friday.
When he compared gays with child molesters and pig fuckers, Catherine New responded: “What do you say now? How can you say such a thing? But compare homosexuality with pedophilia and bestiality?”.
The situation got out some time later, when a teacher intervened in the discussion. Enraged, the bishop threw headphones and microphones and walked out