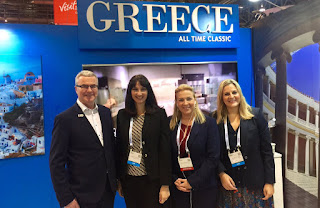 After the dramatic contraction of the previous years, the Greek conference tourism comes back with a leading role …
in the international competition. The negative image of the country abroad has been reversed, while the offer finance packages to popular destinations has fueled a new interest in travel to Greece.
The very good performance of 2015 and 2016, with 26 million. arrivals and 27.5 million respectively, a precursor to an even more promising 2017 for the convention tourism. Greece comeback after years of the 20 most popular destinations on the global scale of popularity for the congress tourism.

Already the messages for the new year from the International Exhibition for Congress Tourism IMEX 2016 in Las Vegas, the United States was very encouraging. The IMEX was completed yesterday, with the Greek national tourism organisation to participate dynamically with a stand, in the presence of the deputy minister of tourism, E.Kountoura. The aim of the Greek delegation was the further development of the conference tourism (citybreak) in Greece to 2017, in the framework of the project Kountoura for extension of the tourist season to 365 days a year!
We have to mention that our country is in an advantageous position compared with other conference growing destinations because this is an already a recognised destination for vacations and recreation with the result that there is plenty of product that meets the “pleasure” part of Conference Tourism.
By elements of the ICCA shows that conference tourism in Greece is growing at a rate of 5% per annum. The expectations after this year’s IMEX raising the bar even higher.