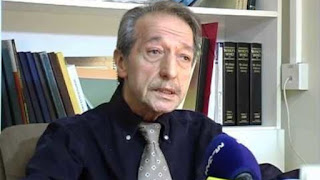 Heavy is the grief that dominates from yesterday with the news of the death of the coroner, Manolis ÎœÎ¹Ï‡Î±Î»Î¿Î´Î·Î¼Î·Ï„ÏÎ¬ÎºÎ·…
Manolis ÎœÎ¹Ï‡Î±Î»Î¿Î´Î·Î¼Î·Ï„ÏÎ¬ÎºÎ·Ï‚ was experiencing serious health problems and in the early hours of Saturday, lost his battle with life.
The last goodbye is expected to address friends, relatives and a crowd of people today at 3 p.m. at the Church of St. Titus.
The noted medical examiner who has served the science of, the local community and the international forensic community, he was the head of the laboratory of forensic medicine, PAGNI since 1989 and was a professor of forensic medicine at the medical school of the university of Crete.
In 2014 it was voted unanimously as honorary president of the Union of Greek medical examiners of which he was the founder and first president of the Forensic medicine Company.
Source