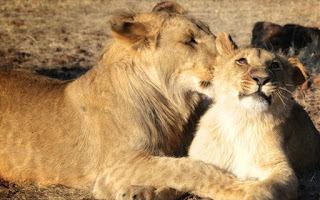 A large group of endangered lion was found to survive hidden in a remote area of north-western Ethiopia.
The unexpected and pleasant discovery of these li-on extends the knowledge of the distribution of the population of endangered species, while labor hopes that the lions can survive in other parts of Africa, particularly in Sudan, report conservationists.
The pride of lions was discovered in the National Park Alatas from the Research Unit for the Protection of Wildlife, University of Oxford. Before the discovery, the National Park Alatas was considered as a possible habitat for lions and take rare visits from people, because of the climate and the remote location.
The research team from Oxford, managed to record images of the lions with the placement of cameras in a dried-up bed of the neighboring river. The icons are also traces of a lion, confirming reports from residents who argue that actually live in the area, lions.
The researchers stated that they also discovered lions in the adjacent National Park ÎÏ„Î¯Î½Ï„ÎµÏ in Sudan.
About 27 with 54 lions are found in the park Alatas, bringing the estimated total population of lions living in the two parks in the 100 to 200 people.
The population of lions in Africa has plummeted from 500,000 at the beginning of the 20th century, to less than 200,000 in the 1950s. Now, it is estimated that only 20,000 lions remain in their natural environment.
The reduction of the population due to the lack of available prey and loss of habitat, according to experts, as well as in increasing conflicts with people trying to protect their animals.