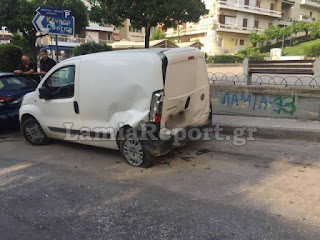 Passed through the square and then fell over in five…
cars, which were parked – Luckily there was no injury.
It all happened at 5:30Ï„Î± morning in the centre of the city and specifically in the square, Diakos.
According to the story, a young man, who was driving a white Alfa Romeo Giulietta, and in which he had a girlfriend for the passenger, originally passed through the square of Freedom. Because he saw that there was a police car in the square and he feared lest after him the cops at high speed on the street Diakos.
Arriving in front of the hotel “Samaras” has lost control. Initially the white Giulietta hit on a small bus that was in front of the hotel and then fell, with power over a white van brand Fiat. The impact was such that successively hit three cars that were parked in front of the white van.
Most of the “victims” were tenants of the hotel were thrown from their beds, listening to the loud “bang” and of course they didn’t believe in luck. The information indicate that the young “racer” was not drunk.
On the occasion of this specific incident would have to say that the Traffic police should take some responsibility for specific cars running in the city all hours of the night and not only.
The fact that we don’t grieve, the victims are purely coincidental. Let’s not wait to become evil and then to take measures.
Source