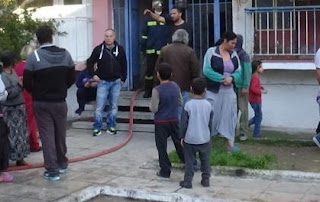 At noon of the Third will say the last “goodbye” to the unlucky 8-year-old Nikolas Laskaris…
relatives and friends, as well as on 12 m. it will be held the funeral from the Church of Saint George Î™Ï„ÎµÏŽÎ½ of Patras, greece.
Tragic figures of his parents Stamoulis Laskaris and Amalia Papastergiou, the younger sister of Melina – Athena, as well as the grandparents.
The burial will be in the Î’Î”Î·Î¼Î¿Ï„Î¹ÎºÏŒ Cemetery of Patras.
Still no one can believe that the 8-year-old lost his life from the fire that broke out in the house on social Housing in the Willows of Patras, greece.
The forensic examination that will be done probably on Monday morning, is expected to “shed” light on the exact cause of death of 8-year-old child, who at noon of the Sabbath, he met a tragic death, when there was a fire in the room where he was.
At the same time mystery surrounds the cause of Ï†Ï‰Ï„Î¹Î¬Ï‚Ï‚ that claimed the life of the 8-year-old, while a lot of the questions with a sovereign, because the child has not managed to react and get out from the space where he was, when he saw the smoke…
From the first data, it is estimated that the death of the boy, due to asphyxiation, while the body of burns. “The men, after putting out the Ï€Ï…ÏÎºÎ±Î³Î¯Î±Ï‚, entering the room, they found the child dead, but not charred, as ÎµÎ»Î­Î³Ï‡Î¸ÎµÎ¹” indicates the tempo24.gr, an Officer of the Fire department of Patras, greece.
The Investigation Department of the Fire department of Patras, greece, has undertaken the inquiry, taking already statements from relatives of the victim and residents of the area.
Source