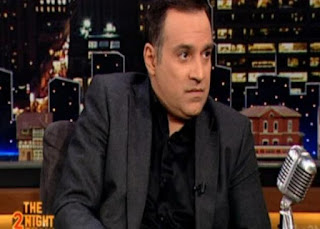 There are financial debt! Necessarily we’ll go in a legal process”…
At the 2night Show was found on the night of Wednesday, the Krateros Katsoulis, who spoke to Gregory Cooper for the cutting of the show “breakfast is Ready”.
“Last year, go to different well because it was a weekend, this year went very well I think for the data that we had. It wasn’t a mistake leaving this weekend to go daily. It was a very correct move, which would have been much better if they had kept some things. It was the station to go to, which when we thought about it and decided to see if it can be done, we sat together with the management of the station, we talked about what it takes to become a breakfast, we agreed to this and so we’re going to try. Nice, a new thing, a new idea, and there we stayed in nice, a new idea, a new thing happened. Have not complied with some things, almost everything.
All the contracts are always, in the last paragraph he writes the following: â€œAny dispute arising between the parties in connection with this contract, shall be resolved exclusively by the competent courts of Athensâ€. This is why we are in this situation,” initially said the Krateros Katsoulis.
“The fact that you have had a few skirmishes with the station or some of the arguments I heard last year. It was everything wrong with the climate there for you?”, he asked Gregory Probst.
“Yes, and it was always in a good mood from our side to fix it. There were always or repeated some affirmations that will change things, but they lived in words. We had 4 people editorial team. When you have agreed on some things and these are not available, by a point and then not. Fighting with unequal manner, without the use of tools. Of course, it happens that a station is not able, due to the economic crisis, to cope financially. He yells and says â€œhey, guys, this, this and this, what do we do? All together! You could put it down to fix itâ€. If there is a good mood and understanding, almost everything is done. If I now get you from here 3 cameras, 10 technicians, 5 lights and the office, I’ll still do it because you’ll do your best, but you can’t be sure that the result will be the same as if you had all that you need”.
“After last year you weren’t happy, why keep at it?”, he asked Gregory Probst and Krateros Katsoulis replied:
“They have written agreements that we made. But it is possible, everything in detail. All the technical features you need for a show. And unfortunately, there have been many, there are still so, and would necessarily go in a legal process, there’s unfinished business, economic, everything. There is no justification from the other side. We learned that it stops the show from the website of the Epsilon, I don’t he came to tell us no. We were always in contact and attempt to contact them, but there was no. Still we were up the next day. Thursday was taken off the air and Friday it wasn’t for show. We didn’t get to say hi to people. Are people who were working every day together and we didn’t get to say good-bye. The Thursday that this happened, we picked up our stuff, put it in the car and we left.
From our side we did everything possible. There are always some terms that may differentiate some things. I can’t tell you more because there have been extrajudicial and from one and from the other side, and I have spoken with my lawyer, I can’t refer to the content of extra-judicial, that will do it at some point, when all this is over”.
“Since last year there have been problems,” he said again, Gregory Cooper, and answered the Krateros Katsoulis.
“Maybe for some reasons to come to a rupture or in a drag race. If, after the other comes to you and say, â€œit’s a mistake, I didn’t mean to, I thought about it, the circumstancesâ€ and make you another proposal, there is a possibility it may be wrong, as it turns out, to say, â€œdid we do that? Did finally, indeed, this year…â€. Do you think what mistakes I made last year, the year before that? This. Be careful not to do it again. To write all of it? To write, you tell me. The sign? The sign. And you say all right, my boy, after we signed. The we talked, we agreed, we signed. Let’s move on then. The courts never take something. There are certain outstanding financial obligations which relate not only to us, me and Katerina, concern and partners. There are things that I can’t say on air,” said Krateros Katsoulis.