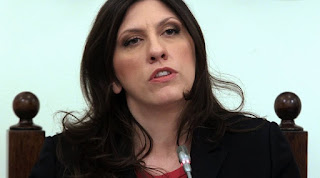 New fire on the prime minister Alexis Tsipras has unleashed the former speaker of the House of Life Konstantopoulou, who… accused him of using extortion as an alibi.
In particular, speaking on Alpha 989, and with reference to the refugee issue and the discussions on Greece’s exit from the Schengen area, mrs. Konstantopoulou spoke of “extortion that has been prepared since the summer” and added: “In the decoration of this extortion was the prime minister himself when he accepted of the summer to repeat the new scenario that is spoken in terms of eurocracy, and is the scenario that “completed the Greek problem and now the problem for Europe is the refugees'”.
In the interview, mrs. Konstantopoulou brought intense criticism to the prime minister, Alexis Tsipras, and he blamed responsibility that does not exercise foreign policy and national politics “in the way that it should, the way it is imposed”. Also featured in the government “incompetent and spineless to face in the field of the institutional framework” to the refugee issue.
Continuing the criticism towards the person of mr Tsipras, on the referendum and the signing of the third memorandum, underlined that mr Tsipras announced the referendum believing that he will lose. “I am absolutely convinced that all the path following the “no” was the predestined path that he had carved on the basis of a “yes”, he said and added: “my assessment is that the signature of the 3rd a memorandum of understanding had been launched, possibly before the elections in January. I think that the agreement of 20 February, and the vote that we did in MR. it was a dress rehearsal generale”.
Also, the former president of the Chamber pointed out that since the last election 50% of the people abstained, as a result of the tactics of the prime minister: “mr Tsipras played games with the democratic process and the elections in any way the legitimacy of trying to load the people, the memorandum that he signed,” he said.
For the list Lagarde, mrs. Konstantopoulou said: “my assessment is that there is a preparation to be buried, the list Lagarde and why it shifted the interest to other files”, while on the finding of the Commission of Truth for the Debt, said: “The government pretends that it will negotiate the debt and at the same time has put the speaker of the House to quash the findings of the Truth Commission and the Commission itself. That doesn’t make it a government that serves the interests of the Greek people”.
Finally, the referred to the “good relationship and cooperation” with Yanis Varoufakis in the context of the formation of “an alternative for Europe”.