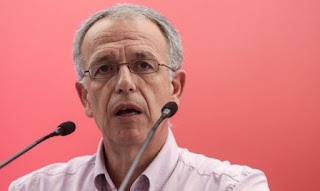 “We believe and we hope that with this we launch will be in 2018, unless a memorandum of understanding and other overtone”…
said the secretary of the Central Committee of SYRIZA, P. King, the radio station “Agency 104,9 fm”.
“I think we had a positive development in the effort that was done throughout this period. We insisted that it’s a political solution, because we had all the elements which were positive –have been confirmed by Eurostat and forced everyone to accept,” said mr King featuring “decisive victory” that “we no longer have 4.5 billion. euro extra measures demanded by the IMF for 2019”.
With regard to the completion of the second evaluation noted: “there is no reason for a delay, because it remains to finalize some issues on the basis of the agreement, which says that he won’t have a single euro of extra austerity, the budgetary cost, and I think that quickly will be achieved and will be completed in the technical part of it, as is and will of all the institutions”. “After everything that has contributed to the Greek society can’t take it anymore. I think that the country can and should join in a different journey with a different policy mix to address the economic crisis. This is linked, of course, and what is happening in Europe. We insisted that the solution to the problem has to do with the set of policies carried out in Europe,” he added.
Mr. King expressed confidence that parliamentary front of SYRIZA “it is uncatchable, because we all understand -and I think the Greek society – that it is embarking on the perception that there is by the side of the SW and even dangerous”. “It was unfortunate for national members to plead in the european parliament not to close the deal and fall the government, as this has never been done historically,” he said, stressing that “this attempt, which they do, is fall in a vacuum, and mainly has collapsed in the eyes of the Greek citizens”.
The secretary of SYRIZA reiterated that the elections will be in 2019, while on the subject of collaborations with other parties, it stated: “As of this moment parties, which I don’t want to support this effort, consider that SYRIZA has a responsibility, while not looking at the responsibilities that the country has reached up to here, there is no case, there can be no agreement and agreement and I think it is clear that terms of Greek social democracy, which does not understand what’s going on in Europe at the moment, so it continues to be the tail of the SOUTHWEST”.