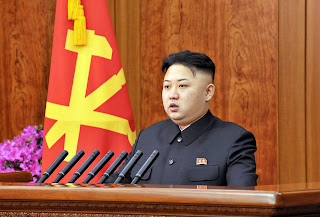 Kim Jong-un, the “honest-to-god” leader of North Korea, attended recently the award ceremony of the scientists…
and the technicians who worked on the launch of long-range missile on 7 February.
In his speech, Kim Jong-un praised those who contributed to the realization of the great project and the featured “patriots” and “remarkable heroes while they were awarded honorary medals and watches engraved with the names of previous leaders of the country, of his grandfather, Kim Il-Sung and his father Kim Jong-Il.
However, during the speech of Kim Jong-un revealed, and the next strategic goal of North Korea, which is none other than the conquest of space. “The conquest of space will be a fierce battle against enemy forces seeking to usurp the peace and our sovereignty. The advance in space is the strategic objective of North Korea,” said the dictator of the most isolated country in the world.
He argued that the country in the future will carry out more launches of satellites in space, which, as he pointed out: “the West has the features covered tests ballistic missile”.
The North Korean government had informed the UN that it intends to launch a rocket to put in orbit a satellite Î³ÎµÏ‰Ï€Î±ÏÎ±Ï„Î®ÏÎ·ÏƒÎ·Ï‚, causing reactions from western governments, which consider the movement a covert test launch ballistic missile.
The president of the united states, Barack Obama, after the launch of the long-range missile signed imposing new sanctions against North Korea concerning the importation of the products of technology or weapons of mass destruction in the country of The sanctions designed to prevent North Korea to acquire a mini-nuclear warheads that could be placed inside the rocket.
Source