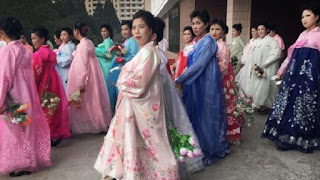 The north Korean dictator has at his disposal on the 2,000 girls for the fucked-up sexual appetites…
North Korea is not a qualification for a girl of 13 years of age and over to be beautiful, as well as in danger to become a slave of the sex of Kim Jong-un. The north Korean leader in compliance with a nonsensical “custom” stemming from the period he was a ph. d. student, his grandfather and continues today goes to the schools in the country and selects young girls.
The selection criteria of the girl child is very strict: To be virgins, to have a height up to 1,65 cm, to have clean and smooth skin without signs, to have a melodious voice, and, of course, is fine bodies.
From the moment that the girls will be selected begins the Calvary. Originally submitted to virginity tests. Then transferred to a special centre where they are trained in dance, massage and sexual toys.
Kim Jong-un has at his disposal on the 2,000 girls who are divided into three groups. All amuse the dictator. One group is dancing, the other for massages and the third is involved in sexual orgies.
The soldiers picked the girls one-by-one. Snatch with violence saying to their parents that they are lucky because they have been selected for a “secret government mission”. These girls are forbidden to see and talk again with their parents or relatives. Some of those who have attempted to escape are executed immediately.
A girl -woman now – describes the hell that he lived for 10 years: “I Was just 15 years old when two soldiers came into my class without notice and they took me. One of them was pointing with his finger, and the other ordered me to follow him. Immediately they asked me if I had sex with a boy. “I felt such shame when I heard the question.” When completed the procedures and a “pass the test” they took me to the training area. I had to dance, get a massage, drink plenty of alcohol and taking part in group orgies. For 10 years serving the sick appetites of his father, Kim Jong-un. I wasn’t allowed to see or talk to anyone from my family, and I knew that trying to escape will be shot immediately. Girls who did ended up with a bullet in the head”.

What’s up with the girls after
After a decade of service, the age 22 – 25, girls “retire”. Reports say that most of the married soldiers, as well as in this way rewarded the men for their loyalty to the country.

Always live in fear and under close monitoring in order not to reveal the big secret. The 2011 death of Kim Jong-il, father of Kim Jong-un), lots of girls were allowed to return to their families. Government to avoid a scandal and to buy their silence they have paid me $ 4,000 and a lot of gifts. Twice a year, and those girls are paid by the state. If a girl reveal “state secrets” will be executed, and that and his family.
Source