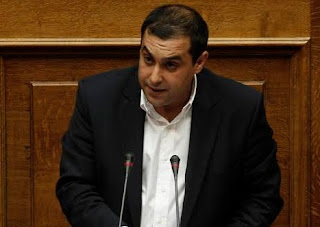 The issue of operation daily ships to the island of Hydra was debated in the Plenary of the House after timely question of Member of SW A of Piraeus and Islands Kostas Katsafados…
During his speech, the Congressman, citing article 12 of law. 4256/2014 which set out the terms and conditions of engagement of professional tourist daily ships that carry out marine tours, stresses that in paragraph 3b, which explicitly prohibits the receipt and the final disembarkation of passengers at intermediate ports, the inhabitants of Hydra have to pay double fare, “as well as paying the way to go and to return from the area in which they want to go, in a settlement which is home to them, without getting the return.”
Mr. Katsafados asked the Minister of Marine and Island Policy, to make an exception for the Hydra, as well as created a serious problem for the inhabitants of the island, but also tourists, as the island banned cars and motorbikes and all shipments are made by water taxi, with the Î·Î¼ÎµÏÏŒÏ€Î»Î¿Î¹Î± and the donkeys.
For his part, mr. Theodoros dritsas were acquired reported that the harbour Master Hydra, already has made positive steps to normalize the issue, which as he said is hard enough, and how to solve it needs the unity and consensus of the local communities.
Mr. Katsafados insisted that the issue has not been solved as the citizens of Hydra continue to pay 6 euros per ticket, while you pay 3 euro to make a double route that doesn’t need them and asked the Minister to give a clear answer.
“A law can be even better when I strengthened the exceptions. And here we are talking about an exception, which you know because of the facts that prevail on the island,” said mr. Katsafados.
The Minister of the Marine in response to mr ÎšÎ±Ï„ÏƒÎ±Ï†Î¬Î´Î¿, stressed that the exception has to be regulated as it would apply to other cases and not only for the Hydra.