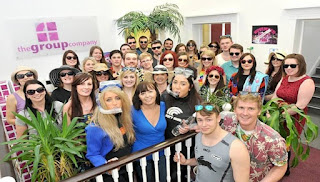 Decade of successful operation shut down a company…
in Britain and the owner of The Group Company, Helen Bilton, wanted to celebrate together with their employees and to thank them for their contribution.
Initially he told them in a meeting they had before the end of 2015, that one day I’ll go all together to the theme park Flamingo Land. But later the revealed that the park was closed so we traveled together in the Caribbean!
“I was thinking of doing a big party to celebrate the decade together with its customers and suppliers. But then I thought that the people who really deserve the award are those who work hard on a daily basis. Six months ago I decided to go to Barbados but to the monthly meeting we asked you to tell me those ideas. Someone suggested the Flamingo Land and I pretended that’s where we go. But at the meeting of the next month I told them that the park is closed so we’re going to Barbados. They didn’t believe me, thought I was kidding”, describes in the Daily Mail.
“Everyone’s working hard and I’m very grateful for that so I’m excited that I can reward you”. The 32 employees of the company who will enjoy a 4-day trip to a 5 star hotel in the Caribbean, will begin their journey Friday.
The company deals with the promotion hotel deal in 500 travel agents and noted all the years of upward trend and increase sales