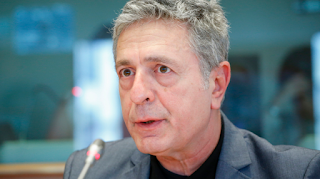 Common action at european level in order to exempt health from the imposition of austerity in Greece and the health costs not included…
the budget deficit of the country, agreed Stelios Kouloglou and the head of the Green Group in the european Parliament, Rebecca Harms.
The proposal submitted by the mep of SYRIZA, the German member of the european parliament during the working lunch, which granted the same in the european Parliament with the main theme of the debate proposals for the reform of the Greek health system.
Guests at the meeting was the cardiologist and founder of the Metropolitan community Clinic of Elliniko in Athens, greece, George Cough, the founder of the citizens ‘ initiative “my home” and strain the community clinic of Katerini, Elias Tsolakidis, the deputy mayor for Social Solidarity, Welfare and Equality of the Municipality of Athens, Maria Stratigaki and the general secretary of the Greens, Friday Î¤ÏƒÎ­Ï„ÏƒÎ·. In addition, participated in the Anna Î¡Î¹Ï„ÏƒÎ±Ï„Î¬ÎºÎ·, responsible for health policy and former partner of the World Health Organization in Copenhagen, the founders of the network of “Supporters and friends of the Greek” in Hamburg, Heinrich Î£Ï„Î­Ï‡ÎµÎ¼Î±Î½ and Calliope ÎœÏ€ÏÎ±Î½Ï„ÏƒÏ„Î­Ï„ÎµÏ, and of the newly formed support team of the Brussels Birgit Urban.
The discussion focused mainly on the emergence of the tragic health impacts of the imposition of harsh austerity in Greece over the last years and to the measures to be taken for the restoration of the Greek health system. The participants agreed on the need to discharge the public health system from the austerity measures, eradication of corruption and proper and fair operation of the tax collection mechanism.
Stelios Kouloglou expressed its support and to the Social Clinic in Katerini, which began operation in 2013 at the initiative of Ilias Tsolakidis, and was housed in the Tobacco station of Katerini, which was granted for a period of five years from the ministry of Rural Development and Food. As said Elias Tsolakidis, the ministry of Rural Development wants to repossess the building for space utilization. The mep of SYRIZA who had previously visited the facilities at the community clinic, undertook to mediate in order to allow a constructive dialogue between the managers of the clinic and the competent ministry.
The debate framed their interventions and the Green meps Ska Keller and ann-margret Î†Î¿Ï…ÎºÎµÎ½ and the mep of New Democracy, Giorgos ÎšÏÏÏ„ÏƒÎ¿Ï‚.
Source