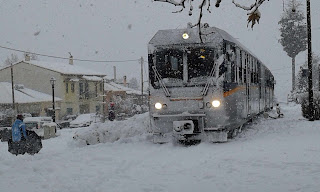 Alert is from the late-night hours and for the next three days, the Political Design of Emergency in the Region of Western Greece…
to address the problems that have begun to create already and is expected to create in the next few hours of extreme weather phenomena that affect the region.
In Î–Î±ÏÎ¿ÏÏ‡Î»Î± has already dropped a great volume of snow and has started the snow clearance, while the first flakes have started to fall and within the city of Kalavryta with the problems have made their appearance in all the mountainous and semi-mountainous volume of Kalavryta and Aigialeia.
In the morning hours it started to snow and in mountainous Nafpaktia, with the machinery of the region to throw salt on the roads from Naupaktos to Ano Chora, and from Nafpaktos to Tree.
From noon and then around the mountain in the West of Greece expected the extreme weather to occur with greater intensity.
First post 19.33, 27/12/16
A change of scenery, of weather expected at dawn Wednesday in Western Greece, the ionian islands and the rest of the country, with the main feature being the very low temperatures and the snowfall in the mountainous and semi-mountainous volume of Achaia, Aitoloakarnania and Ilia
In more detail:
Snowfall expected from late-night to early hours of Wednesday in the area of Kalavryta, a mountainous Aigialeia, and the Mountainous Nafpaktia with the thermometer in a lot of areas to fall to -7
In the lowlands the mercury for the next long weekend is not expected in many areas to exceed 8 degrees celsius.
Source