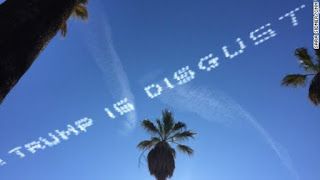 Five planes flew for almost an hour over the annual rose parade in Pasadena, California, forming…
phrases in the sky that said: “America is great. The Trump is disgusting. Anyone except the Trump”, with thousands of spectators to lift up their eyes to behold the sight.
The television network CBS broadcast that the businessman Stan Pate, of Alabama, was behind this flying protest that was targeting him as a candidate for the nomination of the Republican Party in the presidential election of 2016.
As he said in the CBS considers the billionaire candidate shabby, noting that this intervention was “only the beginning”, as it has to pay to broadcast messages against Trump in college hoops all-american football.
As relays the SUNDAY, Go, as the Trump is a real estate agent, has given money to the election campaigns of Democratic and Republican candidates in the past. In the current campaign, has contributed to the campaign of a candidate for the nomination of the Republican Party, Marco Rubio.
Source