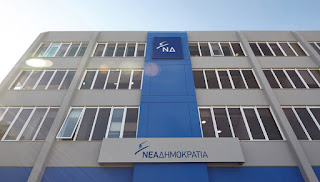 Greece to prime minister Mitsotakis will become a State with law and order,” stresses in a statement the…
deputy Section chief of Internal affairs of the New Republic, a member of Larissa, Maximus Doe, on the occasion of the last night incidents in the vicinity of the Polytechnic, but today’s attack at the offices of SYRIZA. Mr. Doe has condemned “without footnotes or asterisks” as he said, the attack on the offices of SYRIZA, but accused while the prime minister and the government that “deliberately turning a blind eye in front of the huge problem of lawlessness and violence that has become everyday life”.
“The tolerance against the action of vandals who wreak undisturbed the destruction, or the “state of Exarchia”, either on Public Transport, gives the green light for the continued and growing lawlessness” noted mr. Doe, by filling: “mr Tsipras called, in essence, the Greek people not to believe in eyes and ears. And that’s why a Government is incompetent and Î¹Î´ÎµÎ¿Î»Î·Ï€Ï„Î¹ÎºÏŽÎ½ refuses to take responsibility”.
When the deputy section chief of the Interior of the SOUTHWEST, “the Greek society and the New Democracy is not going to acquiesce in a tolerance of violence and lawlessness, in which more and more on the slide of the country” and concluded by saying “The Greece prime minister, Kyriakos Mitsotakis will become a State with law and order, security for all its citizens.
Source: RES ICM