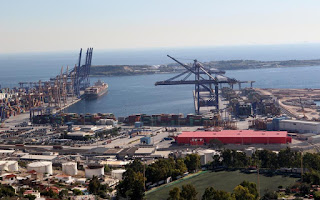 The road to Piraeus takes the first of two large water tanks that have been ordered by the Cosco for the naval repairing zone (NEZ) of the PPA…
Depending on the availability of a ship capable of transporting the 80,000 tons tank (postpanamax), is expected to enter late in the spring or summer, sources indicate that the chinese group. Is from the Greek public administration, however, it will be time to install it, after this you have to complete the envisaged licensing process, explain. And this, if it does not lead to delays from appeals of the local communities, who consider that affected by the advent of both this tank and the second, with a capacity of 300,000 tonnes (capesize), which will follow immediately after.
The ministries of Shipping and the Economy-seeking to the extent possible, quickest installation in the Piraeus of the above equipment, which has committed to buy and to operate in the port of PIRAEUS to the Cosco. Obvious objective is to stimulate economic activity in this sector and to increase employment. Already, the new administration has proceeded with the repair of two smaller stone tank which has launched and the repair of the other two small waterways, shall report to the “K” cycles of administration of the PPA.
Problems, however, may be created with the siting, according to sources in the port industry. Î‘Ï…Ï„Î¿Î´Î¹Î¿Î¹ÎºÎ·Ï„Î¹ÎºÎ¿Î¯ and other local and social bodies in the regions included in the regions that were and remain under a concession in the port of PIRAEUS, as part of the ÎšÏ…Î½ÏŒÏƒÎ¿Ï…ÏÎ±Ï‚ at Salamis, object, or preparing appeals on grounds of environmental or archaeological interest.
Critical bet is and the range of work that can attract these new shipbuilding infrastructure. Who’s gonna bring jobs. In the ship repairing zone of PIRAEUS port authority lease land dozens of Greek businesses of the sector. It is these companies, like the rest of the Piraeus, and the Greek workers that they expect to get business from vessels will no longer be able to Î´ÎµÎ¾Î±Î¼ÎµÎ½Î¯Î¶Î¿Î½Ï„Î±Î¹ on new infrastructure. But you need to ensure on-time completion of the work. “Given that, by general admission, there is still a high know-how in Greece, it remains to be restored and the credibility of the times”, report of the technical directors Ï€Î»Î¿Î¹Î¿ÎºÏ„Î·Ï„ÏÎ¹ÏŽÎ½ companies. However, everyone seems to expect to a large extent by Cosco and only to make the commercial promotion of the Greek shipbuilding industry, expecting either to bring its own ships or others, while it takes total effort, complete cycles of the PPA.
Source